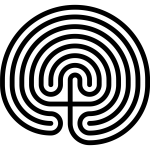 I’ve just been privileged to spend the weekend camping with some very lovely pagan people; some of whom I already knew, some I didn’t. It put me in a very mellow and thankful mood, which may have contributed to the insight that came to me as I sat down to meditate last night. My theme of ‘love in a myth’ owes something to my fellow-campers as well as to my study of mythology and human nature. Thank you, Anderidudes!

I’ve recently started thinking about the deeper meaning of myth and legend. When I think of mythology, I usually turn to the British myth cycle, as it’s the one I’ve studied most in the last few years. But the myth that popped into my head last night was the one about Theseus and the Minotaur. We talked about labyrinths over the weekend, and it occurred to me that the one in which the Minotaur lived was most likely the type with only a single way in and out, rather than the confusing type, all dead ends and wrong turns. Of course, either can be a metaphor for life! But if I’m right, how did the other heroes who went in fail to come out?

What struck me was that perhaps they went in with the wrong intentions, or the wrong vibrations. Only Theseus had the golden thread, given to him by Ariadne. I’m sure it helped him defeat the Minotaur. Of course he also found his way out again – there was only one way he could go from the centre. The thread his lover gave him, it occurred to me, wasn’t there to guide him (the way was easy to follow), but to remind him, when he met the monster he had gone to confront, that he was loved. Isn’t it always easier to deal with our demons when we feel loved? Doesn’t feeling loved give you confidence and moral support, even when the person isn’t there?

The myth of Theseus and the Minotaur is a love story; more than that, it’s a story where love helps the hero to be heroic. With Ariadne’s love, and her golden thread, Theseus is able not only to enter the labyrinth and confront the monster within, but to defeat it and emerge from the maze triumphant.

We all have our labyrinths to contend with, and our Minotaurs to face. Thinking about this ‘love in a myth’, the next time you’re faced with something you don’t know how to defeat or deal with, try spending some time just thinking of those who love you. Remember their confidence in you, and how much their support means to you. Meditate on it. Quiet your mind, and think of a loved one who makes you smile. Spend time with that feeling, absorb it. You could even mould it into a shield, and/or a weapon to hurl at your troubles. If your aim is true, you’ll pierce them through the heart, and emerge from your own trials triumphant.

You’ll be able to face your own demons with much more strength and courage, knowing you have love on your side.